Thank you so much for the excellent lecture on a most unusual and interesting man [Leopold Godowsky]. You are a superb pianist, and it was a real treat for our piano students to see and hear you in action. - prof. James Winn, University of Nevada, U.S.A.

Carl Petersson was our guest at the Royal College of Music in Stockholm this year, 2012. He held a very interesting piano seminar class on Leopold Godowsky, the polish pianist and composer. Mr Petersson talked about Godowsky's life and prodigious talent but mostly about his music, concentrating on the transcriptions of the Chopin studies as well as the less known Java Suite. Carl was partly playing the piano himself and partly using his own inspired recording of the Java Suite. It is clear that Mr. Petersson has deep knowledge and love for the composer. - Prof. Anders Kilström, Royal College of Music in Stockholm, Sweden 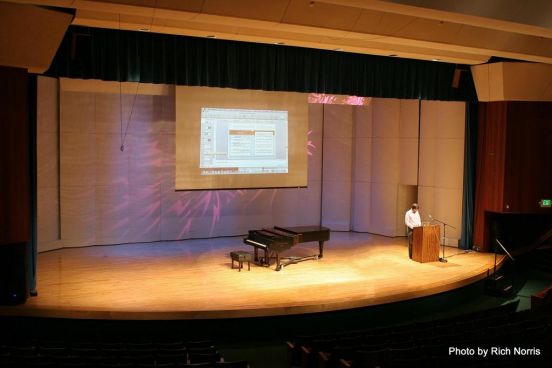 Photo taken during Carl's preparation for his lecture at the Nightingale Concert Hall, University of Nevada, Reno, U.S.A.